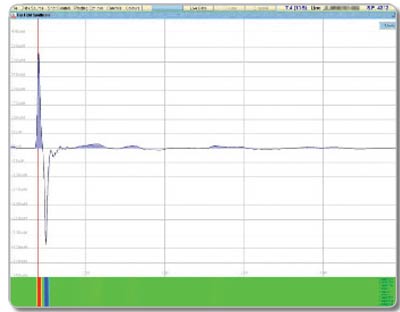 The program algorithm makes use of the Notional Source Technique whereby the Near Field Hydrophone (NFH) data and knowledge of the geometry and velocity of the array components are used to produce ‘Notional Sources’. A Notional Source is the NFH signature with the sound of neighbouring guns removed. Once the Notional Sources have been generated a synthesized far field signature can be produced for any spatial coordinate under the source. In this way individual signatures can be generated for every CDP in a survey allowing the seismic data processor to ‘deconvolute’ the recorded data with the dynamically changing sound generated for every shot instead of with a static library signature.

The far field, notional sources and near field signatures can be recorded on the GunLink System or may be output to the recording system.

The provision of the far field signature in real time allows the seismic crew to monitor the total output of the source regardless of changing offsets, array configurations or gun failures and thus provides enhanced quality control of the data acquired. In addition, the differences induced by non identical source hardware and configurations on a survey to survey basis can be genuinely removed, essential to maintaining the value of 4D data.